It was towards the end of 2012 when I first felt a lump in my right breast. In March 2013, I had a breast scan and the report mentioned that there was a suspicious thing on my right breast, but they couldn’t tell me if it was benign or what.

The general practitioner asked me to go for second opinion and she referred me to another doctor who I thought would be able to give me more information about the lump, but that doctor only told me that he could remove the lump right away if I had the money. I was shocked about what I was hearing. I expected him to tell me what was wrong in my breast. I was disappointed because he did not know, or did not want to tell me what was wrong. What should I do? I was disappointed so I went to another hospital.

The doctor there requested me to have a fine needle aspiration and similar to my breast scan result, he couldn’t tell me if the lump was benign or malignant. He told me that I would need to have a biopsy. He said that a biopsy is the only test that would tell me if the lump on my right breast was benign or malignant, but they did not offer this biopsy at the hospital.

So I went to another hospital for the biopsy. It was in May 2013 when I was finally diagnosed with Stage II breast cancer. It was devastating news for me and to my family. My main concern at that time was financial. I know that breast cancer is curable. I cried for two days. After that I told myself that I have to be strong, my life doesn't end. I should do whatever treatment or medication to be cured.

I started to browse the internet and asked a friend for some information on who can help me about my situation. My problem was I that I didn’t have health insurance and I didn't have enough money for the treatment. My colleague had seen the website for Breast Cancer Arabia so she gave me the website link. I immediately checked the website, saw the contact number and called right away. I spoke to Ms. Elizabeth Reyes and I told her my situation and I told her that I didn't have money for my surgery. I'm thankful for her because she told me that the foundation would be willing to help me.

The Doctor explained what treatment I should undergo, what the side effect would be and how long the treatment would take. In June 2013 I started my chemotherapy. Before I started the chemo I got ready by cutting my hair. On the second session of my first cycle, the rest of my hair started to fall a lot. This is when I decided to shave my head and be bald. I started to wear a wig or scarfs. I couldn’t change fact, this particular side effect of the chemo.

There were times that I wanted to vomit, or I felt sleepy & tired after the session. The chemotherapy lasted for 6 months. It wasn’t until the last part of my chemo when they told me that I have to have radiotherapy as well. I asked again for assistance from Breast Cancer Arabia for my radiotherapy. I'm am blessed because they helped me again. In November 2013 I had breast conservative management. I started my radiotherapy in January 2014 and that lasted for more than a month. I'm now taking a Tamoxifen (for my hormonal treatment). Every 3 months I have a follow up check-up with my oncologist.

When I asked for assistance from Breast Cancer Arabia and was told that the Foundation would help me, I never tried to ask for help from the other groups.

My faith to God helped me a lot to take this obstacle easy. I urge all woman to regularly check themselves and seek medical advice as soon as possible if they have any concerns.

Lastly, we should be conscious what we eat.

It was in December 2013, we had planned a family vacation to India. A week before the beginning of the trip, I had piercing pain in my left breast. I didn't want to ruin my family vacation but the fear of cancer had struck me hard. I went with my husband to the hospital and was informed that I need to undergo further test before they could confirm anything. The results would come in 2 working days. All I did during this time was pray that it would not be this dreadful disease.

After 2 days the doctor gave a call home and informed my daughter that I need to come and meet him as soon as possible. I rushed from my school to the hospital along with my husband. The dreadful news hit us like lightning, shattering our lives into pieces. All I could think of was will I survive and how we would cover up the hospital charges.


The next day when I went back to work, I informed the management about my situation; unable to hold my tears back. My school supported me and said they would try and apply for help from Breast Cancer Arabia on my behalf. When I got confirmation that Breast Cancer Arabia would support my expenses for the treatment, I felt like an angel came and took half my worries away. Now all I needed to worry about was to fight and win against this disease.


Breast Cancer Arabia referred me to the best hospitals for the treatment and also to the best doctors. Dr Richard Reyes and Dr Shaheena took care of me completely. They guided and explained me in detail everything that I should expect to happen. Knowing what the future would hold helped me to keep faith and to be brave.


I travelled to my hometown in India for the final stage of my treatment. The doctor in India reassured me that I had received the best treatment from my doctors. The sound of that made me feel like I have almost won.


Now, after my treatment has been completed, I feel much healthier and happier. I can't even imagine how our financial situation would have been now if Breast Cancer Arabia didn't come to us as our saving angel.


Thank you Breast Cancer Arabia, we will always be grateful.

In 2012, I was diagnosed with a breast cancer from Lifeline Hospital. That time, I didn't have any idea how much the treatment would cost me. All I know is that I need to do something about my illness and I need to do it fast.

It was really difficult for me to get an appointment for mastectomy since the slots were always full at Dubai Hospital. So Doctor Isaaf advised me to have it at International Modern Hospital. It was fine with me since I was still covered by insurance provided by the company I am working with. However, when my chemotherapy started in 2013, our company changed our health care provider and therefore all pre-existing conditions were not covered for at least one year. I didn't know how I could continue with my treatment since it cost me 2,000/-aed per session and I was just earning 3,000/-aed a month.


I spoke about this to my colleagues at work and one of them found the Breast Cancer Arabia from the internet. I tried sending an email to Elizabeth (not actually expecting some reply). That was why I was surprised when I received an email from her confirming that the organization will sponsor the cost of my treatment.


Breast Cancer Arabia gave me hope and support at the time when I needed them the most and I can't thank them enough.


I hope through this story I can also inspire women who are suffering from breast cancer and show them that they are not alone. 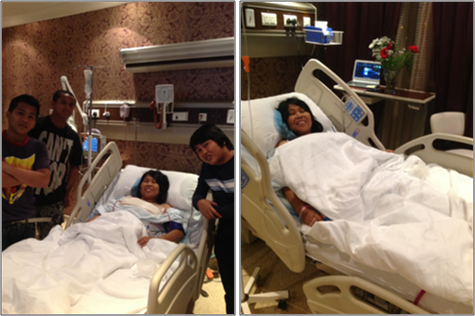 In July 2012, I was diagnosed with high grade DCIS and Paget’s Disease of the nipple. In August, 2012, I underwent Hadfields Procedure and then in November 2012, I underwent bilateral mastectomy with reconstruction at American Academy of Cosmetic Surgery Hospital with follow-ups into 2013.

All of my treatment has been very generously funded by the Breast Cancer Arabia Foundation, without them I would have been unable to pay for the treatment. I can safely say I owe them my life.


The whole experience of having Cancer has been made as easy as it can be for someone in my position, a wonderful surgeons, caring staff and no hassles with appointments and no hospital accountants chasing me for payments.


Breast Cancer Arabia Foundation saved my life so please help them to help others who find themselves in a similar position to me. 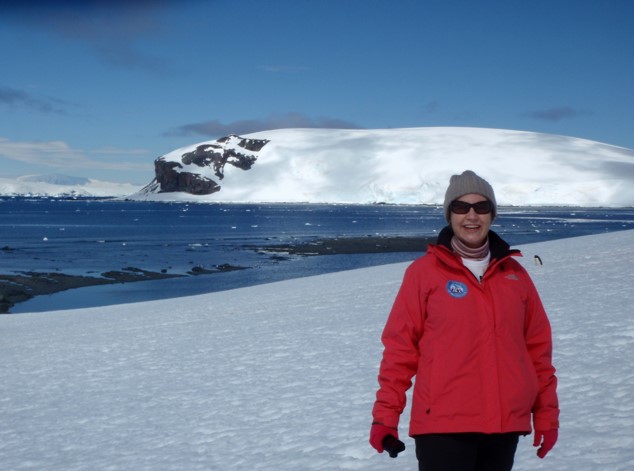 I was diagnosed in 2003 at 33 years of age with hormone receptor positive, Her2 negative breast cancer after detecting a lump in my left breast. I had a modified radical mastectomy followed by 6 months of chemotherapy, after which I was put on Tamoxifen. A year later I had reconstructive surgery using the Gold standard tram flap and simultaneously also had an elected, prophylactic mastectomy on the right side. I thereafter went into remission for 4 years, but in 2009 I found out after experiencing agonizing pain in my back and hips, that the cancer had returned and much to my shock and horror, had progressed to stage 4. It had metastasized to my lungs, bones, spine, ribs, pelvis and even the back of my skull. Miraculously it hadn’t spread to my brain. 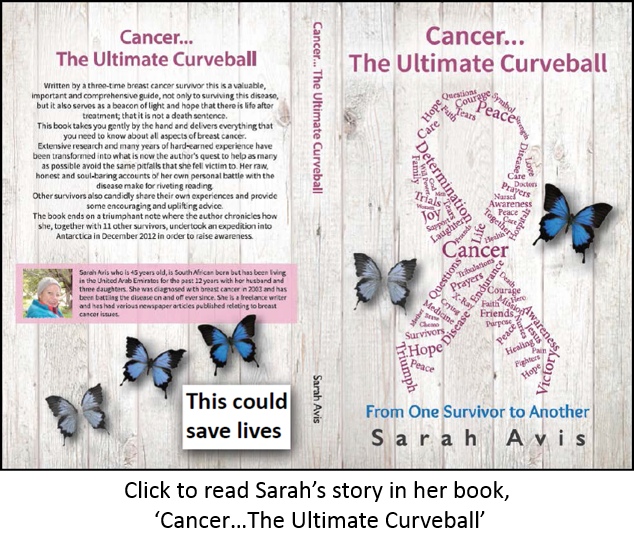 I was rapidly plunged into aggressive treatment once again that consisted of radiation and chemotherapy that lasted 9 months. Towards the end of this chemo, I started having difficulty breathing and was so weak and dizzy that by the time my last chemotherapy session had arrived, my husband had to wheel me into the hospital in a wheelchair. All of this…despite the fact that I had complained to the doctor treating me at the time that I was having great difficulty breathing, all of which he wrote off to side effects from the chemo. They sent me for an x-ray, and was rushed onto emergency surgery where they removed 5 liters of fluid that had been building up in my pleural cavity surrounding my lungs. I eventually made a full recovery, but progress was slow and painful.

It was 2 years later that I got involved and started training to undertake the expedition into Antarctica in December 2012.

In May of 2013 I suffered yet another relapse and found out that my cancer was no longer hormone receptor positive, but that I was now dealing with a triple negative disease. I had to have yet more aggressive chemotherapy, but I’m happy to report that I’m now in partial remission again. I’m still on monthly intravenous low grade chemotherapy treatments together with Avastin and Xgeva injections, but with minimal side effects and I’m able to live a normal life. I even manage to drag myself off to the gym 4 times a week.